With the recent discovery of two moonlike objects around ‘not quite a planet’ Pluto, there’s an online poll to name the new worldlets via this link. Personally I’d have selected Scylla and Charybdis, but those weren’t on the list of twelve options, so I voted for Cerberus (But of course) and Orpheus, the mythological hero who had to pass said legendary guardian of the underworld in a failed bid to recover his lost love, Eurydice.

For some odd reason I wondered whether some of the names were already taken, like Persephone, but apparently not. I’m normally a lot sharper than this, but since that bout of gastric upset the other week, I’ve been feeling rather post-viral. Rather run down and tired all the time. Friends tell me this is the aftermath of the Norovirus, and can last up to three weeks. Oh joy.

At least for any would be Science Fiction writers. In November Google launched this map of the milky way based on known astronomical data called 100,000 Stars. I was busy looking for some kind of information on the Perseus arm of the Milky way for a new project when I literally stumbled across it.

One minor Caveat. The browser application requires a delicate touch with the mouse to navigate, and the bigger your screen the better. I’m going to check it out using the web facility on our Smart TV.

While not encyclopaedic, it’s a work in progress and will no doubt improve as all these open source projects do. I’m seriously impressed. Well done all.

Update: Doesn’t work on our ‘Smart’ TV. At least directly off the Internet. Just keeps on cycling through the ‘Focusing Optics’ stage. I suppose if I used a VGA cable from my venerable laptop I could get a reasonable result. Probably the issue with only support up to Flash 8 that a lot of Samsung and LG sets have.

Yesterday afternoon I went in for my evening shift, and as I was driving up the parkway from Duke point, was treated to the sight of two perfect little squarish chunks of rainbow twenty two degrees on either side of the setting sun. No parhelic circle, just two small bite size chunks of rainbow. As the sun disappeared behind the tree clad mass of Mount Benson, the two sundogs could clearly be seen, perched cheekily on the shoulders of the mountain as though taking a breather.

Last night was also a good one for a moon halo. As I stepped out of the car after work I was treated to a good one, A perfect ring of iron around the full moon. If the weather holds, we may see the same again tonight.

I’m currently having a Henry Higgins “By George he’s got it” moment. My stammer is mostly absent, and I’m finally confident enough to sight read my own work to camera. The proof of the pudding came yesterday, when I settled down in front of my laptop camera and read the first eleven pages of ‘Sky full of stars’, hardly muffing a word. Well, apart from six occurrences that I noticed. Not bad for twenty-nine minutes without a break. I’m quite pleased.

Until I’ve sorted out some kind of video hosting, I think my best path is to post on Youtube and embed on this site on a specific page like on a Youtube channel. While I’m sure there will be some less than kind comments from the casually immature, I’m hoping that there will be more supportive responses. A couple of friends tell me that the best way to deal with negative people online is simply to delete their unpleasantness.

The current state of play with our local Weather is that we might get lucky with clearing skies to view a possible Aurora Borealis on Saturday night. SOHO has experienced considerable interference from heavy S1 level particle bombardment as reported on Spaceweather.com. I shall also be watching the CSSDP Real time Auroral data to see if anything in happening elsewhere.

According to Spaceweather.com we’re due another X Class solar flare on Friday. I’ll try another Aurora observation blog if conditions are good, but this time I’ll wrap up better against my little biting friends.

Work on ‘Darkness’ and the ‘Cerberus’ series is currently painfully slow. On the upside I’m currently in the process of writing to various convention holders about being a speaker on the topic of science fiction, albeit the slightly nerdy end of the spectrum. My 20-30 minute talk “The big what if” always seems to be well received by audiences, mainly because I avoid sight reading, and simply talk to people instead of ‘at’ them. Oddly enough my slight stammer seems to disappear when I get into a more relaxed stride.

Okay. I don’t know if this is going to happen, but I’ going to try live blogging this Aurora. Providing we get to see it this far south. All times are Pacific Standard Time. (-8 GMT)

Outside on the deck watching the dusk creep towards me. Mosquito coils lit. Citronella candles lit to try and keep the bugs at bay. Covered feet to neck and hoping not to get bitten too much. Writing a sequence for ‘Darkness’ about the handover of a new starship to its pilot.

The dusk is gorgeous and soft, with a ticklish little breeze continually blowing out the candles. A confused cockerel is crowing as the light fades. Who keeps chickens around here? The way the sound is carrying tonight it could well be over on Mudge, or even Gabriola island.

Have set up my old hiking compass to see if there is any magnetic deviation. Probably not, but you never find out by not looking. Light fading quite rapidly. No visible stars yet.

If the flare levels hold up, It’s a great night for skywatching. Barely a cloud in the sky, and the few that are are low down on the horizon to the North heading West. The sky to the north is surprisingly bright. First star / planet spotted 10-12 degrees east of vertical. Someone is playing what sounds like Buddhist prayer chants. Or is it First Nations? Just going to duck inside and get some insect repellant. Which I haven’t got. Bummer. OVATION predicts that Aurora should be visible over northern Lake Superior.

Constellations starting to take form. Vancouver, slightly north of east is covered by a slight haze of light pollution, punctuated by the bright dual pinpoints of aircraft headlights. Looking at data peaks in ‘Risk’ part of graphic. Last large one was about twenty plus minutes ago.

Ursa Major and Polaris now clearly identifiable without visual aids. Stars visible within 15 degrees of horizon away from the city lights. Not sure if I just caught a flash of something to the North and East, or whether it was an optical illusion caused by quickly looking away from my laptop screen. 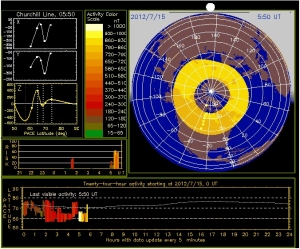 Horizon seems lighter to the North. There’s a band of deep indigo, then a vaguely greenish haze up to about ten degrees above the horizon. Although I think that’s reflected light off the leftover haze from those Siberian wildfires that made the news last week. It’s quite distinct. A hazy, slightly lighter band about 10-12 degrees up from the horizon.

Nothing much to report. Might just duck inside to put some socks on my feet. 11:42, what sounded like two shots. Not a shotgun, and not Aurora related, but I’d say within 200 metres. No shouts or other fuss from the neighbours, so it was probably someone trying to scare off some of the local Raccoons.

Nipping indoors to connect my laptop to it’s charger. My dog is hiding under my desk and steadfastly refuses to come out.

According to both OVATION predictions and the CSSDP the area of probability as far as seeing the Northern Lights is concerned is getting closer.

Paydirt. Aurora visible as monochrome pale vertical banding behind clouds due north. Moving back outdoors. Angie came out and confirmed my observation when her eyes had adjusted. She described the glow as ‘greenish and indistinct’. The vertical component is intermittent and not bright enough to take video footage of at present.

It’s like vertical streaks of anticrepuscular light. Right up to forty degrees or more above the horizon. Not bright enough to show up on my camera, but quite distinct with the occasional flash of brighter green.

Might get a bit more distinct, but not much at this latitude. The occasional greenish flash, and shadowy pillars in the sky are enough to show where the old gods came from. For myself, i have work in the morning, and need to catch some sleep. Shutting down.

CSSDP screencap for this morning. Looks like activity was greatest around 3am according to the ‘Risk’ part of the graph. 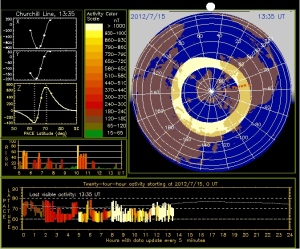 I’ve picked up a few mosquito bites on the back of my left calf (Which I covered up, but those little things get everywhere), but nothing some antiseptic skin lotion won’t fix.